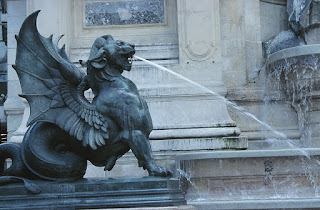 The guivre, a dragon of France is fascinating to me. Instead of roasting his victims with fire, this dragon drowns them in water. This flies in the face of what I thought what traditional dragons should be. I always thought that dragons needed fire as a part of their being. The guivre breaks this rule by spouting water to put fires out.

According to European legends, guivres had bodies like other dragons. They looked reptilian and had wings. Like other dragons, the guivre had toxic breath, and killed living things from plants to animals. Aggressive in nature, they also attacked people. This makes them similar to “classic” dragons. 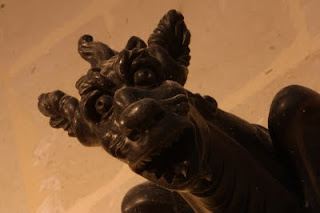 What I found interesting is that the guivres were afraid of naked people. Living in watery places such as rivers, lakes, and streams, they would run amok until they encountered a person taking a bath. Then, these dragons would quickly flee. This is the main reason why that they are not seen in France these days. To avoid seeing a naked person, guivres moved to remote areas far from towns and cities.

As with other dragons, guivres could be tamed with the Sign of the Cross. But I like the notion that a dragon could be frighten by nude humans. Moreover, guivres were so traumatized by naked people, that they could be easily defeated by taking one’s clothes off. One wit suggested that nude beaches began in Europe as a way to drive away these fierce dragons.

I think that the world is big enough for a guivre to be living somewhere. A dragon spouting water is unique. A dragon afraid of naked people is even more unique. That this dragon existed tickles my imagination. The guivre breaks the rules of what makes a dragon a “dragon”. They open the door to other possibilities of dragoness. The guivre challenges preconceived ideas of dragons and broadens the definition of “dragon”.

Buy my books on dragons and other mythic animals!

MYTHIC ANIMALS
Posted by Va. Carper at 7:28 AM

Va. Carper
Virginia Carper has worked with and communicated with nature especially animals since childhood. She offers on-line courses about animals . Check out her self-published books on animals including dragons and other mythic beasts.